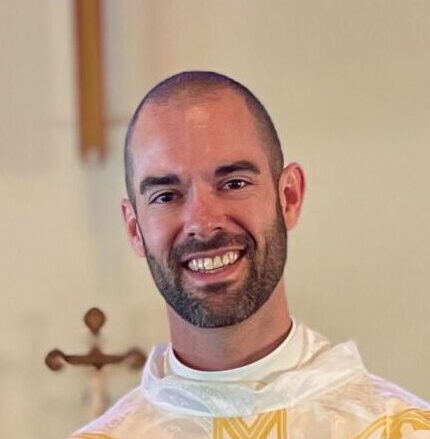 Pastor David Frey was born in Michigan in February of 1985, as the third child of four to Rev. James and Sandy Frey.

After graduating from Michigan Lutheran Seminary, a WELS preparatory high school, he attended Martin Luther College in New Ulm, Minnesota and graduated in 2007 with a Bachelor of Arts degree. The following fall he enrolled at Wisconsin Lutheran Seminary where he spent four years. Three of those years were spent on campus taking classes and one of those years, the third year, he spent in Columbia, Tennessee serving as a vicar. Upon graduation from the Seminary in 2011, Pastor Frey was assigned to Living Word where he has served since.

He met his wife, Heidi, during his high school years at Michigan Lutheran Seminary. Heidi moved much during her childhood, but finally settled in Michigan where her father still serves as a pastor. After three years apart during college, the high school sweethearts were married in July of 2007. The Lord has since blessed them with five children.

Pastor Frey enjoys spending time with his family, reading, listening to music, watching and playing almost any sport, and spending time outdoors. Being from Michigan, he cheers mainly for the University of Michigan and the professional Detroit teams.

An Invitation from Pastor Frey

We exist for this simple purpose: To preach God’s grace and peace that is found only in Jesus Christ.

It was God’s undeserved love for sinners that sent His one and only Son to earth. It was that Son’s death on a cross that won peace with God for all people. It is His Word and Sacraments that distribute that peace to all nations until the end of time.

It is my privilege to proclaim that message week after week and to distribute the Holy Sacraments. Because of Christ and His work for us, we have the certain hope of heaven.

I invite you to the Divine Service Sunday morning at 9:30am to hear about the peace God has won for you. I also invite you to browse our website. If you have a comment or question on any of the material, send me an email and I will try to answer in a timely fashion to the best of my ability.

Peace be with you,